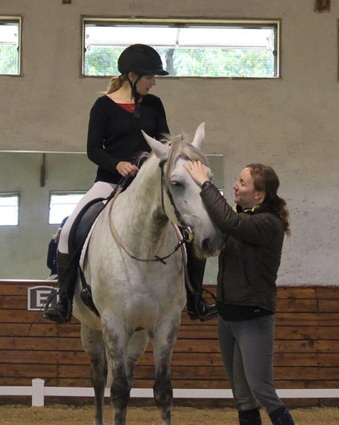 Training
Classically trained in France, and furthering her education in the US where she moved in 2006, Madeleine keeps refining her understanding of the correct gymnastic of a horse. And the more years she spends working with horses and competing them, the more she realizes how important it is for her to never compromise on their relaxation and well-being - mentally and physically. She focuses on keeping the horse happy and stress-free at all time, through the most demanding work in the ring, to every moments of their life on the farm.

Madeleine has received a solid training in the three disciplines (dressage, jumping, cross country) while growing up in Paris. She feels incredibly lucky to have been  studying under the Colonel Christian Carde, to whom she owes the will to keep defending the French classical tradition of riding, its unique research of th﻿e purest contact, in relaxation, lightness, balance and tempo. Madeleine studied in France at the French National riding School under expert teaching from Cadre Noir Officers. She keeps that connection with Saumur by inviting clinicians to her farm every year.
In the US, Madeleine has found her biggest influence in Bettina Drummond and is very grateful for her tutelage - there is no one like Bettina Drummond to reach such a level of refinement and correctness in the aids, through the deepest mental and physical connection with the horse.

Judging
In 2018, Madeleine graduated from the USDF - L Program with distinction. She loves having the opportunity to judge competitions to give classical feedbacks to many fellow dressage enthusiasts. She judged at shows like D4K Lendon's Youth Festival, the ESDCTA Championships and many other local schooling shows.

Competing
​USDF Bronze medalist in 2013, Madeleine has been training and showing all kind of breeds, from 3 year olds to FEI, including stallions and off the track thoroughbreds, getting scores into the upper 70s.
​She earned numerous National Champion and Reserve Champion titles in the USDF All Breeds Awards.
Her students have also been showing successfully, always having fun, winning many blue ribbons and even regional championship titles. Madeleine also often works without a saddle or a bridle, because upper level horses can also have fun! 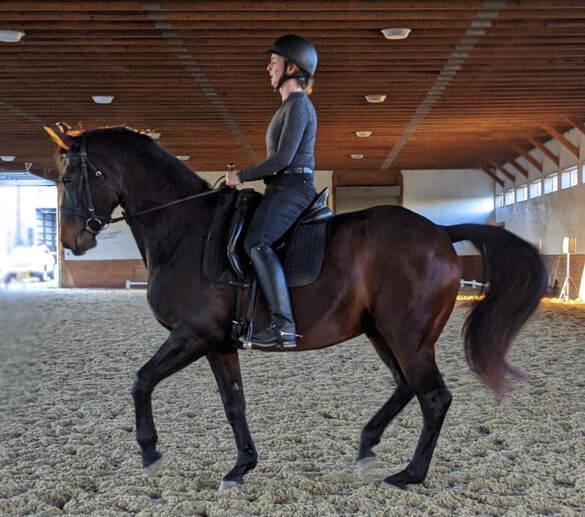 Writing
Beside riding horses since age 8, Madeleine holds a MA in French Literature from the Sorbonne and works as an occasional equestrian journalist. She has been the USA correspondant for few French magazines, including L'Eperon and Cheval Magazine, for whom she covered the 2010 World Equestrian Games in Kentucky.
In 2015, she published a book about the relation of Classical Dressage and Modern Competition, assisting her mentor the Colonel Christian Carde - buy in French here!